(Solemnity) Epiphany of the Lord Matthew 2:1-12 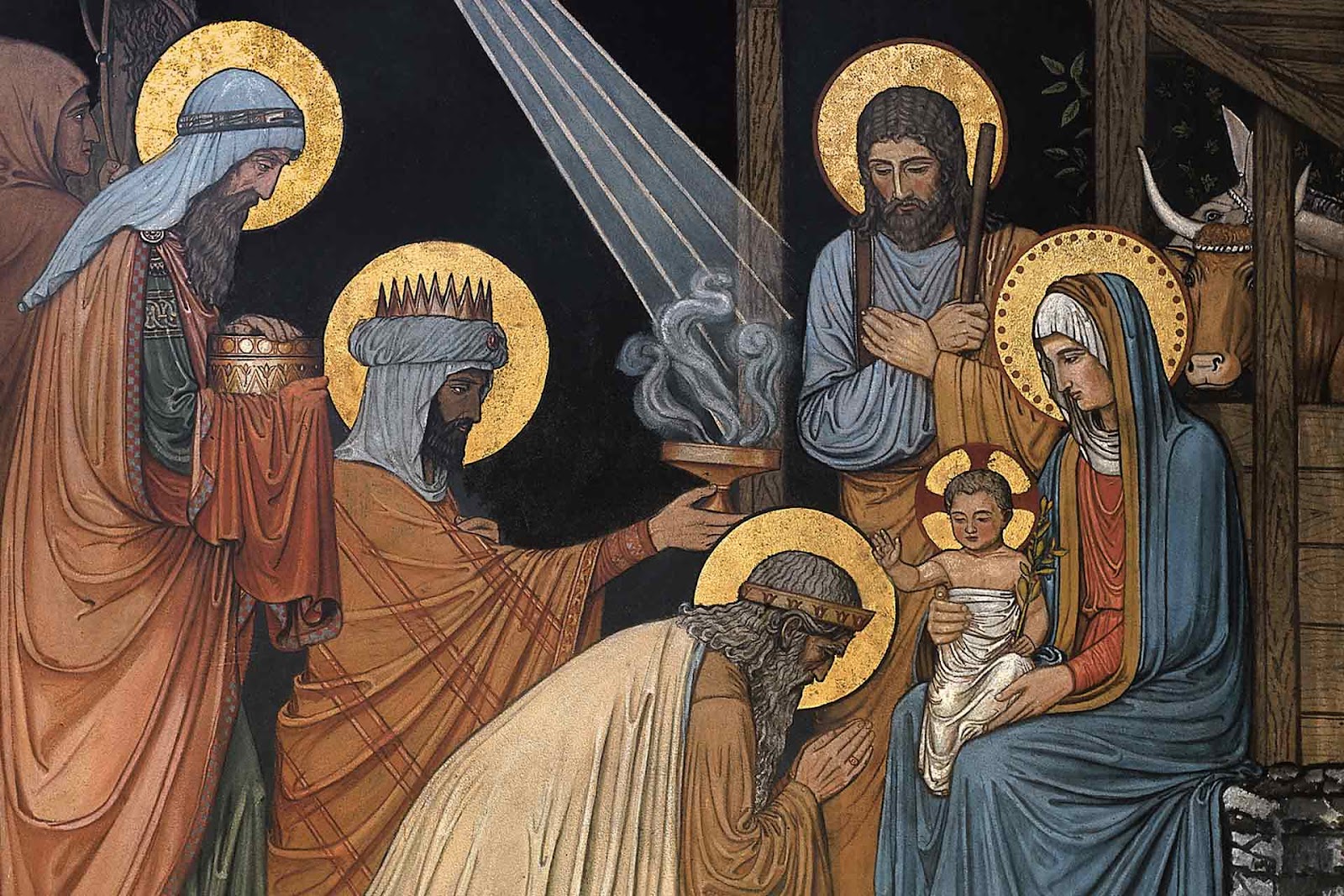 Jesus came to bring light to our darkened world. Today's feast of the Epiphany celebrates the unveiling of this light to the Gentiles. Our scene is set during the reign of Herod, who had been appointed king by the Roman Senate in 40 BC. He was a tyrannical despot with a penchant for parricide (he murdered his wife, three sons, uncle and mother-in-law), but his taste for bloodshed, as we shall see, extended beyond his family circle. The Magi, who may have been astrologers from Persia or southern Arabia, followed a star (some scholars suggest it was the conjunction of Jupiter and Saturn). In feigning to be interested in the birth of the Messiah, Herod revealed his duplicity and cunning. In fact, his heart was bent on extinguishing the light of the world. The Magi, on the other hand, were bent on worshipping the light of the world.

St Pope John Paul II saw in the Magi's journey in search of a king a parallel to the human journey: “Whatever the age, culture, civilisation or nation, people are aways searching for God. Like the wise men, they glimpse him through the eyes of faith, then set forth in faith in the desire to draw closer to him in whom they believe and come to him in the eternal Bethlehem. However, if they have not found him through faith, in looking for the truth they seek this faith, and so seek God.”  St Augustine said, I would not have sought you, if I had not already found you. Before starting to seek God, each of us has in fact found him, and rooted in this starting point we enter ever more deeply into the mystery of God- Christ in us the hope of glory.

As we celebrate the beginning of this new year, we unite our hearts to the vision of the Church and proclaim the light of Christ to the world. We play a vital role in making Christ known – his love, mercy and compassion overwhelm the coldness and extinguish the darkness in our hearts.

Lord Jesus, on this most holy feast I proclaim that you are the light of the world. I dedicate my life to being a city on a hilltop and a lamp to radiate your life and light.

The Nativity of the Blessed Virgin Mary

Readers of the Bible are tempted to skip the ﬁrst sixteen verses of Matthew’s Gospel.  After all, it’s just a long list of names!  Although, in recent years, there has been a renewed interest in tracing one’s family tree, genealogies are often viewed as superﬂuous by a generation that prides itself on being future-oriented and forward-looking. To ancient peoples, however, genealogies were of immense importance.  Genealogies were the means by which Bible- time Jews traced their ancestry right back to Abraham, thus reassuring themselves of their position as rightful heirs of God’s covenant promises.

Matthew’s opening phrase ‘An account of the genealogy...’ reads, literally, ‘the book of the genesis. . . ’ , an expression that echoes Genesis 2:4 in' the Septuagint (the Greek translation of the Old Testament) and would have been very familiar to Matthew’s original readers.  By employing this phrase in connection with the Messiah, Matthew sets Jesus in the context of what God had been doing from the earliest days.

Matthew’s genealogy is constructed around three key periods in Israel’s history. Abraham and David recall two crucial covenants (Gen. 12:1ff; 2 Sam. 7:12ff) that significantly shaped Jewish identity.  The Babylonian Exile (referred to in yerses 1 1—12) called into serious question these covenant promises – since the land was lost and the House of David no longer ruled.  So, after their return from exile, the Jews eagerly awaited the coming of a Messiah who would fulfil the promises given to Abraham and David. Against this backdrop Matthew announces the ‘genesis’ of the one who would bnn'g to fruition these promises: .‘Jesus the Messiah, the son of David, the son of Abraham’.

The genealogy climaxes with the mention of Joseph.  Tradition suggests that Mary, too, was of the House of David.  But since lineage was established by the male line, in order for Jesus to be proclaimed a true ‘son of David’ Joseph had formally to adopt him.  In verse 18, the word translated ‘birth’ is the same as that used in verse 1 (literally, ‘genesis’). The story that follows is not so much a birth story, but an extension of the genealogy which establishes Jesus’s rightful place in the messianic line.

‘At the foot of the cross Mary became our mother.  Just before he died, Jesus gave his mother to St John, and St John to his mother.  And so, all of us become her children.’  (St Theresa of Kolkata)